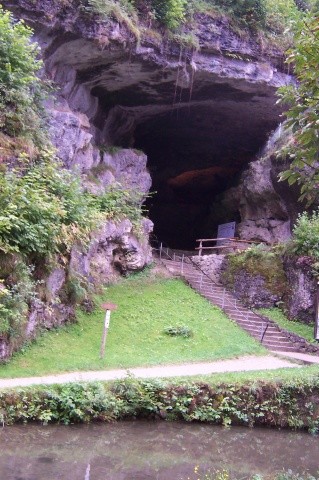 Teufelshohle (Devil's Cave)The next morning, Mari's father drove us to a cave in nearby Pottenstein. Since I'm a geologist, they knew I'd like caves and rocks. We took the tour of Teufelshohle [http://www.suite101.com/article.cfm/paleontology/100737] Pottenstein (Devil's Cave). I actually understood most of the tour in German - maybe because I already understood the geology. I got some neat shots of cave formations and was surprised at the lack of protective measures towards the cave formations. In the States, you are told not to touch any formations because the oils in your fingers kills the growth. But in this cave, people were touching everything they could reach. Maybe because these caves have been toured (and touched) for a lot longer that it no longer matters. One portion of the tour you had to duck through a tight low spot, making it difficult not to touch the walls (see photo!). 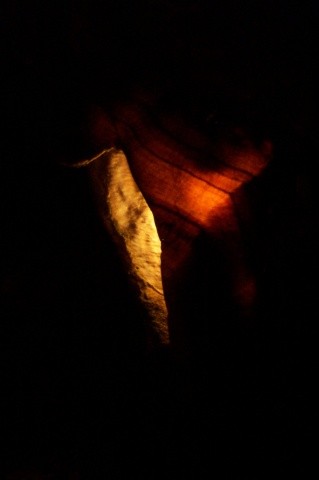 Cave Bacon, TeufelshohleI really enjoyed the tour. We ended up outside and had a short hike back to the beginning. I liked the bright colors of the furniture on the patio.

Next we stopped at a castle - Burg Pottenstein [http://translate.google.com/translate?hl=en&sl=de&u=http://www.burgpottenstein.de/&sa=X&oi=translate&resnum=1&ct=result&prev=/search%3Fq%3Dburg%2Bpottenstein%26hl%3Den%26rls%3DTSHA,TSHA:2005-45,TSHA:en]. We drove up a steep hill and then climbed up a bunch of steep steps that were really close together and really hard to walk on. I kept tripping. We looked through rooms of old armor and weapons and the bedrooms, sitting rooms, and dining rooms set up as they might have been at one time. We couldn't take photos there. There were some buildings outside with old pieces, like keys, musical instruments, and weapons. 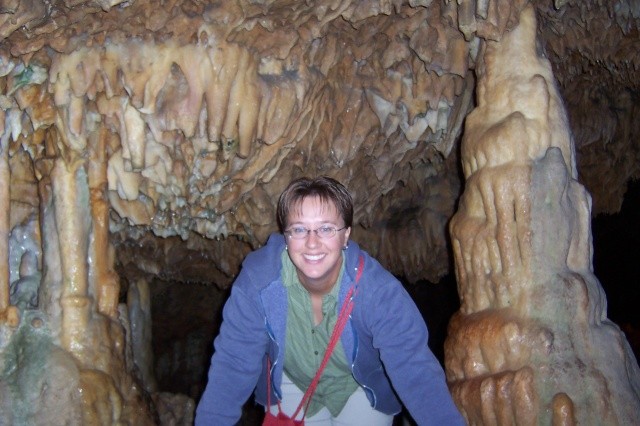 They also had an old barn-like building with the Fachwerk - with the half timber construction. This building had lots of photos and history written up, mostly in German.

I wanted a photo from the town of the castle, so we drove and found some nice shots that included the old city wall. I also had to laugh at the "control your pet waste" sign. As we were leaving town, I spotted a rock shop and was very excited to go in and buy rocks and fossils from the area for a good price. I gave a rock to Mari to remember me by

The last stop was at a quarry where we could look for fossils. I'm not a huge fossil fan, but it is always fun to look. All I found were a few fossils of shells - of which I have plenty at home. But I had fun and I was pleased that Mari and her dad were able to find the perfect way to "entertain" me while I was there.

After a quick lunch I was off to the train station...

Posted by alyssa_ob 16:00 Archived in Germany

Previous Next Table of contents

This blog requires you to be a logged in member of Travellerspoint to place comments.

If you aren't a member of Travellerspoint yet, you can join for free.